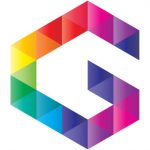 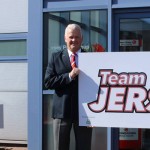 As the clock ticks down towards 27 June, the official Team Jersey logo for this year’s NatWest Island Games has been revealed.
Working in partnership with Jersey Post, who in 2014 committed to support Team Jersey for both the 2015 and also the 2017 NatWest Island Games, a brand new logo has been designed and approved for our sporting representatives to wear when the games take place in less than 115 days’ time.
The logo, designed by LAB-6 in conjunction with Jersey Post and Team Jersey officials, will take pride of place on the official Team Jersey kit which will be revealed at the Island Games fashion show at Fort Regent in May. However, the logo will be used before this date to help garner support from the community for our athletes in the build up to the games in June.
Tim Brown, Jersey Post Chief Executive said, “We are delighted to have helped design the official team logo. Our main role in the sponsorship of Team Jersey is to encourage the community to support the team and help them to achieve their sporting goals – hopefully with lots of medals! Not only will the logo help to give the team a greater identity and feeling of camaraderie amongst the athletes themselves, but will also give us all the chance to feel part of the games and to get behind, and support Team Jersey.”
As well as appearing on the official team kit, there are plans to reveal official Team Jersey supporter merchandise for islanders to purchase and wear before, during and after the games. The logo will also be used on a number of the sports teams’ kits and at a range of promotional events and activities in the build up to the games in June.
Steve Jacobs from Team Jersey stated, “We were obviously delighted to have Jersey Post back on board again as Team Jersey sponsor, but even more pleased with the level of
involvement that they want to have with the team. The logo is a real asset to the home games as we try our hardest to gather as much local support for our athletes as possible.”